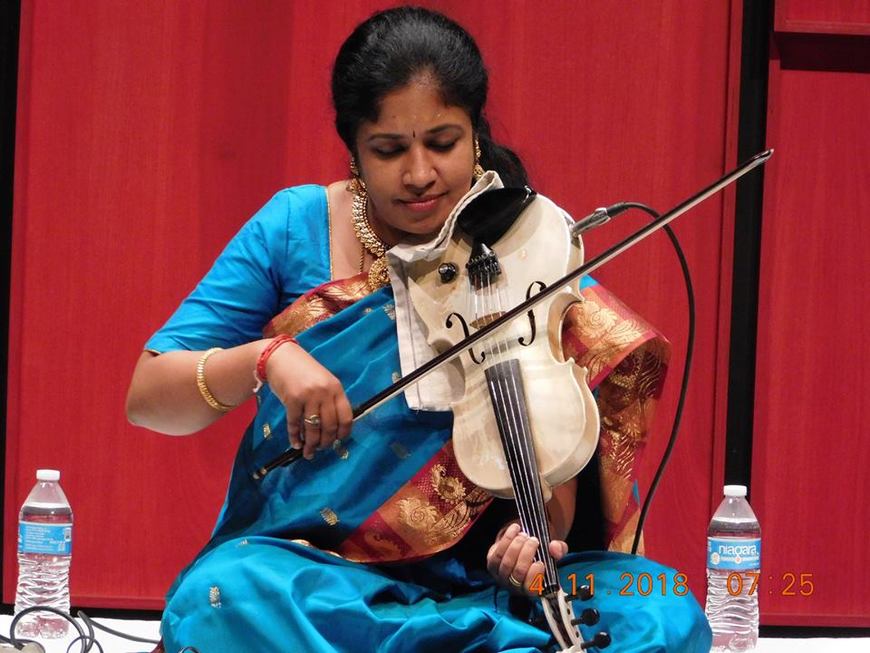 Renowned Violinist, Nandini Muthuswamy is hailed as an exceptional musician of the present generation. Widely regarded as a Maestro & Virtuoso, she hails from an illustrious family of musicians. Being a 4th generation musician, her Guru – Siśya paramparā or musical lineage traces back to the Trinity - Saint Tyāgarāja, Śri Muttusvāmi Dikśitar, Śri Śyāma Śāstri and Śri Bālusvāmi Dikśitar, who was responsible for introducing the Violin into the firmament of South Indian Classical Music.

Nandini, whose prodigious talent was evident from an early age, began her initial training in South Indian Classical Music from the age of 3 from her Guru & Grandfather – “Sangīta Chakravarthi” Sri V. Lakshminarayana Iyer and from her Guru & Mother “Sangīta Kalā Sarasvati” Smt. Subbulakshmi Muthuswamy. She was also fortunate to receive musical training from her Guru “Sangīta Pitāmaha” Sri Semmangudi  Srinivasa Iyer. Her musicianship was further honed under the able guidance of her Guru & Uncle “Kalaimāmani” Sri L. Vaidyanathan. She has also been greatly inspired by her uncles Violin Maestros, Dr. L. Subramaniam & Dr. L. Shankar.

Accalaimed as a prodigy, Nandini Muthuswamy began her concert career at the age of 10 and has blossomed into one of the finest and most sought after musicians of the present day. Along with her sister Dr. M. Lalitha, she forms a part of the much acclaimed Duo – The Violin Sisters, who have enthralled audiences worldwide with their mellifluous music.

With a career extending over two decades, Nandini is regarded as a highly imaginative virtuoso Violinist whose violin playing is characterised by impeccable bowing and dexterous fingering. She is well known for the purity of notes – Sruti Suddham and command overlayam or rhythm. Gifted with a sweet and rich tone, the music that cascades from her Violin is known to be sublime. Sampradaya Suddham or Classicism steeped in Tradition is the hallmark of her Violin playing. She has specialized in playing varnam-s in different grades of tempo and in playing Kalpana Svara-s in many grades of speed, which is a prominent and unique feature of her style of violin playing. Her innate artistry, technical virtuosity combined with Bhava or musical emotionalism has endowed her music with fine aesthetic sensibilities. There is a rare spirituality about her music which soaked in Bhakti Bhava  has endowed her music with a transcedental quality. With her fine musicianship and rare insight into the art, she has defined new limits for her musical artistry. Regarded as a trendsetter of refined Violin playing, she has evolved a style of her own and is widely respected for her artistry.
Performance in Major Music Festivals

Applauded by connoisseurs & laymen alike, for her original style of violin playing, Nandini Muthuswamyhas been featured in numerous music festivals and concerts across the globe. As an empanelled artiste of the ICCR, she has represented India in several music festivals abroad. She along with her sister Dr. M. Lalitha became the first Indian musicians to perform in the Free State Province, South Africa and their concert was a historical event. Nandini Muthuswamy has also had the rare honour of being the First South Indian Musician to perform in the British Parliament. Some of the major festivals and venues, where she has performed include the Sadlers Wells Theatre, Royal Academy of Arts, BGLT, Rise Festival, Music Academy, Sirifort auditorium, Chowdiah Memorial Hall, Rang Bhavan, Bharatiya Vidya Bhavan, Glas Palais, Opera House, Julia Morgan Theatre, Soorya Festival, Sprit of Unity Concerts, Millenium Concert Festival, DITI etc. As a cultural ambassador of an opulent musical tradition, she spreads the message of Global Harmony and peace, through Music. Nandini Muthuswamy has performed extensively in several countries in all the 5 continents of the world. She has performed in India, Nepal, Singapore, Malaysia, Australia, New Zealand, South Africa, Mauritius, UK, USA, Norway, France , Germany, Luxembourg and the Middle-East.

Performance of other Musical Genres

As a multi-faceted musician, Nandini Muthuswamy’sforays into other musical genres have received critical acclaim. She is adept in different World Music genres and Western Classical Music. Besides being a Violin Soloist and a Duo with her sister Dr. M. Lalitha, she presents Trans Global Fusion Concerts also. She is also a Carnatic Vocalist. She has collaborated with some of the finest musicians,  such as Ronu Mazumdar, Quatre Bonne String Orchestra, Fazal Qureshi, Tiruvalaputhur Kaliyamurthy, 3 Tenor Boys, Pirpauke Finnish Fusion Band, Carl Rathus, Tirupankur Muthukumaraswamy, Mannargudi Vasudevan and others in her Fusion and Jugalbandi explorations. She also became the first Female Conductor of the Bosch Bela String Orchestra, South Africa. Nandini is also a composer par excellence and has composed Fusion Compositions portraying the various shades of global music.

With her sublime music, Nandini Muthuswamy has carved a niche for herself in the world of music. Her performances have been widely applauded by connoisseurs and critics.  She has been featured in several global Radio & TV networks. Recently she was featured by the BBC’s  World Routes.

On the academics front, Nandini is a brilliant academician and holds triple Master’s Degrees in Indian Music, Ethnomusicology and Information Science. She is also a recipient of several prizes, medals and ranks for her excellence in academics. In her never ending pursuit of excellence her research into music has further widened her musical horizons. Besides performances, she has also presented Lectures and workshops in several prestigious universities and organisations. She is also a Music Educator and conducts an Indian Music Program at the Summer School of SOAS, University of London.  She has also served as an adjudicator and examiner for Music Festivals and examinations. She is also a multi-linguist and is conversant with English, Tamil, Sanskrit, French and German.

Nandini, regards her music as a Tapas - as an internal spiritual voyage of Music. With her firm adherence the values of classicism and dedication to the finer values of music she represents the finest of the musicians in her genre, in her quest for musical excellence.