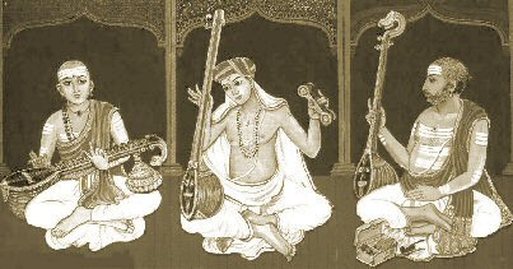 Carnatic Music also known as Karṇaṭaka Sangītam in India, is the classical music tradition from the southern part of the Indian subcontinent. Like all art forms in Indian culture, Carnatic Music is believed to have divine origins-- it is believed to have originated from the Gods. The Gods themselves are regarded as the very personification of Music or Nādasvaroopa. As a result many of the Hindu Gods are portrayed as being closely associated with music. The commonest examples are Goddess Sarasvati with the Vīṇa or Lute & Lord Krishna with the Flute. Music with its sacred associations is regarded as a spiritual discipline, that leads the individual to the path of salvation.

The origins of Classical Indian music can be traced back to nearly 2000 years to the source of its origin - the Vedas which are the ancient sacred texts of the Hindus. The Sāma Veda is said to have laid the foundation for Indian music, and consists mainly of Rgvedic hymns set to melody which would be sung using 3 to 7 musical notes during Vedic sacrifices. The Yajur Veda, which mainly consists of sacrificial formulae, mentions the Vīṇa as an accompaniment to vocal recitations during the sacrifices. For several centuries Carnatic Music has maintained a strong association with temples & spiritualism and hence this spiritual quality finds a place in most musical performances.

Carnatic Music rests on two main elements: rāga, the modal system, and tāla, the metrical system. The rāga system is based on the scheme of the 72 Melakarta-s. There are an infinite number of rāga-s and each having its own identity. Each rāga is invested with its individuality by means of factors such as ornaments or gamakā-s, characteristic phrases etc. The exoticism that underlies a rāga improvisation is in understanding its spiritual essence & subtleties. The tāla system is rhythmic, varied & complex. The tāla-s are rhythmic cycles executed with a specific number of beats. The basis of the tāla system is the Sapta tāla-s or the Seven tāla-s.

Traditionally, Carnatic Music is taught in the Guru-Sishya tradition, where knowledge is imparted by the Guru or Master to the Sishya or disciple. The Guru is venerated and it is important to secure his grace and blessings in order to gain mastery over the discipline.

The Carnatic concert format or the Katcheri Padhati consists of varied musical forms featured in a concert lasting for a duration of about 3 hours. Different forms of melodic/rhythmic improvisations such as the Rāga ālāpana, Niraval, Kalpana Svaram etc. are performed. Lighter pieces known as Tukkadā-s are performed towards the end of the concert.

Carnatic Music is a musical genre that is artistic yet scientific. Its spirituality & devotional content has made it a musical system that is not merely entertaining but one which enriches the soul.