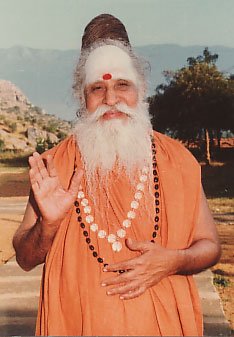 Nandini feels that she is very fortunate to have received the Blessings and Guidance of her Illustrious Gurus. She owes all her success and says that what she is today is due to the Blessings & Grace of her Spiritual Guru Sathguru Santhananda Swamigal, who has been a beacon of light to her. 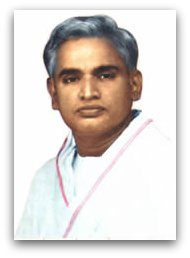 Nandini commenced her musical training from her Guru & Grand-father V.Lakshminarayana. It was he who sowed the seeds of fine classical music in her and her sister Dr. M. Lalitha. Sri. V. Lakshminarayana Iyer - was amulti faceted musician, Vocalist, Violinist, Musicologist, conductor, composer & a techer par excellence. He belonged to a family of musicians. His father, Sri. Vaidyanatha Iyer was proficient in music and used to render the Tiruppugaz-s with devotion, while his mother Smt. V. Brehannayaki was a talented vocalist & a well-known personality. Hisn paternal side belonged to the Mirasdar family, while his maternal side belonged to a VEdic family and were pandits in Sanskrit. His uncle was a good vocalist and was an 'Asthana Vidwan' in the Royal court of Travancore.

He was a very famous teacher and had many students. He trained his daughters, his sons and grandchildren in both Vocal and Violin playing. He has performed the violin in many World Music Festivals of Cal-State University, Whitter College Music Academy of Los Angeles. He was honoured with many awards and titles, chief among them being the `Sangeetha Chakravarthy’ conferred by theIndian Music Circle USA. Prof. Lakshminarayana Iyer served as a Visiting Professor and artiste in Universities abroad. He was a Visiting Professor in Cal Arts University Valencia, California. He has composed many kirtanas and also cittasvaras to the compositions of his composer daughter Ganam. In 1992, theMadras Music Academy, honoured Vidwan Prof. V. Lakshminarayana Iyer’s contribution to the world of music by placing his portrait in the “Hall of fame”.  In 2004, the Government of India released a Commemorative postage stamp honouring V. Lakshminarayana Iyer, which was released by the Hon’ble President of India A. P. J. Abdul Kalam. 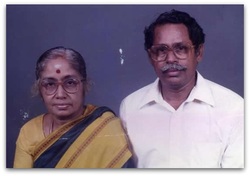 Nandini is very grateful to her parents – Father: Friend, Philosopher & Guide Sri. K. Muthuswamy, who has been a constant source of inspiration & encouragement to her & to her Guru and Mother Smt. Subbulakshmi Muthuswamy, who has been instrumental in honing her musical talent to perfection. Her parents have been her greatest source of inspiration.

Shri. K. Muthuswamy was born in Madurai and is a multi talented sports person - cricket, tennis, table tennis, carrom, slow and fast cycling. He has won many medals, prizes and awards in these sports. A good batsman, he formed the 4 c's - Chinna Chokikulam Cricket Club and represented Madurai in various sports meet. A voracious and an avis reader, he is an exponent in English Literature, especially the works of William Shakespeare. He is her best critic as well as a friend, philosopher & guide. An arts & a Music Promoter, he founded the Music organisation - Nandi Fine Arts and regularly organises concerts not only in Chennai but also abroad. The 'Sathguru Shrimath Santhananda Award' and the title of 'Nandikeswara Nada Kaladhara' are being presented bt Nandi Fine Arts every year to deserving musicians.

Subbulakshmi Muthuswamy was born on August 22nd to Prof.   V. Lakshminarayana Iyer and Smt. L. Seethalakshmi and was trained in South Indian Classical Vocal and Violin by her father Shri.  V. Lakshminarayana. She also derived great inspiration from her mother Smt. L. Seethalakshmi who was both a Vocalist and a Vainika. Mrs. M. Subbulakshmi is a well-known vocalist, violinist and music teacher who belongs to a great musical heritage.  Being a child prodigy she started performing vocal duet concerts along with her sister Brehannayaki from a very early age.  Besides learning Vocal and Violin from her father Shri.  V. Lakshminarayana Iyer, she also had her Vocal training from Tiruparkadal Srinivasa Iyengar (a disciple of Kanchipuram Sri Naina Pillai), Ramnad Krishnan (her paternal uncle) and Sangita Pitamaha Semmangudi Srinivasa Iyer. She also learnt music from Jayamma (daughter of Dhanamma).  She is an `A’ grade artist of the Radio Ceylon and has lent her voice as a play back singer in a few films. She has given numerous concerts in many countries including Srilanka, Singapore, Malaysia, Australia, Nepal, India, London, US,South Africa, Mauritius and has performed in several Radio and Television networks. She has performed the Violin along with her brothers. A Founder Director of the Lakshminarayana School of Music in Chennai She is a prominent Guru having trained numerous students including her daughters Dr. M. Lalitha and Nandini Muthuswamy. She has composed music and set to tune some of the compositions for not only South Indian Classical but also for her daughters Trans Global Fusion. She conducts the recitals of her daughters and has been featured in many albums of her daughters. She was awarded the title of `Sangeetha Kala Saraswathy’ by Santhalaya an UK based Arts and Music Foundation for her contribution in the field of music. 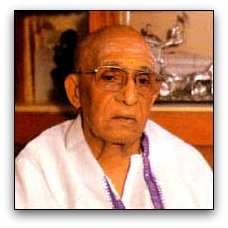 Nandini was very fortunate to be the sishya of the Doyen of Carnatic Music- “Sangeetha Pithamaha” “Padma Vibhushan” Semmangudi Srinivasa Iyer, who taught her the finer aspects of music & from whom she imbibed the Karnataka Sampradaya Shuddam.
“Sangeetha Pithamaha” “Padma Vibhushan” Dr. Semmangudi Srinivasa Iyer, one of the greatest Carnatic vocalists of the twentieth century and was born in Tirukkodikaval to Radhakrishna Iyer and Dharmasamvardini Ammal. He lived with his maternal uncle TirukkodikavalKrishna Iyer, a legendary violin maestro and then started learning music from his cousin Semmangudi Narayanaswamy Iyer. He also learnt from Gottuvadyam Sakharama Rao, Umayalpuram Swaminatha Iyer and Maharajapuram Viswanatha Iyer. He was the youngest recipient of the Sangeetha Kalanidhi awarded by the Music Academy in and has received many awards including the Padma Bhushan, Padma Vibhushan from the Government of India, Rajya Seva Nirata from the Maharaja of Travancore,  Sangeet Natak Academy award, Raga Ratnakara from the Sringeri Sharada Peetam, Sangita Kalaratna from the Kanchi KamakotiPeetam, Isai Perarignar, Kalidas Samman from Government of Madhya Pradesh. Considered the Pitamaha of modern Carnatic Music he was instrumental, along with Harikesanallur Muthiah Bhagavathar, for the bringing to light the works of Maharaja Svathi Tirunal . He served as the Chief Producer of Carnatic music at All India Radio, Madras. 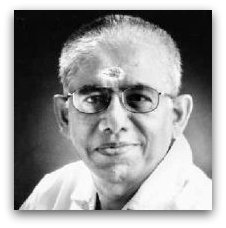 Nandini is grateful to her Guru & uncle Shri. L. Vaidyanathan, who was greatly instrumental in exposing her to different musical genres. It was his tutelage that brought forth the great qualities of musicianship in her.
Shri. L. Vaidyanathan was a child prodigy and was trained in South Indian Classical music by his father Shri.  V. Lakshminarayana Iyer. He also learnt Vocal from Sri. G. N. Balasubramaniam. He started giving Violin solo concerts at the age of 8. He has accompanied several leading musicians like Chembai Vaidyanatha Iyer, Maharajapuram Viswanatha Iyer, G. N. Balasubramaniam, D. K. Pattammal, Srirangam Iyengar, Alathoor Brothers, Madurai Mani Iyer, Ramnad Krishnan, S. Kalyanaraman, S. Balachander etc. He learnt Hindustani Music from Master Krishnanand and is prolific in Western Classical Music. He performed the Violin Trio along with his brothers L. Subramaniam and L. Shankar and toured all over India, Malaysia, Singapore and Coast to Coast in the United States of America with the legendary Palghat Mani Iyer on the Mridangam. He received the President’s award from Dr. Rajendra Prasad in the All India Radio Violin Competition at the age of sixteen and was awarded the `A’ grade straightaway at the age of 16. He was a versatile and prolific music director, Composer, Arranger cum Producer. He has done Music direction for several films (Tamil, Kannada, Malayalam, Telugu, Hindi, English) including many award winning films (Both National and State awards) in various languages.

He is the recipient of several awards and titles. He received the title of`Kalaimamani’ from the Government of Tamilnadu. He received the Best Music Director Award from the Government of Karnataka for the film `Pushpaka Vimana’ in Kannada. He received the highest award of `Bharata Muni’ from the Andra Pradesh government and was presented the `Kannadasan award’ from Ajantha Fine Arts. Apart from films he has also composed the music for many Dance Ballets, TV serials (the famous Malgudi Days, Tenali, Kanda Puranam), Albums and fusion productions. He has composed several experimental compositions in Carnatic, Western and fusion. He has performed with John Cooper (Piano) and Hinar Holm (Cello) in India and other countries. He collaborated with Russian Musicians for Fusion at the Russian Music Festival.
GURU – Smt. Ramani Bhaskar

Nandini is fortunate to have Smt. Ramani Bhaskar as her Guru. It is from her that she learnt rare compositions of Sri Muthuswamy Dikshitar & the art of executing subtle nuances/gamakas.

Mrs. Ramani Baskar – learnt music from a very early age. She had her lessons from Mudikondan Mani a disciple of Mudikondan Venkatrama Iyer. She then learnt from Smt. Abhayamba, a Vina exponent and mother of Smt. Kalpagam Swaminathan belonging to the Sishya Parampara of Sri Muthuswmay Dikshitar. She is an exponent in the rendering of the Kritis of Sri Muthuswamy Dikshitar, and learnt them from Sri Kallidaikurichi Mahadeva Bhagavathar and has a vast repertoire of them. Apart from the compositions of the trinity she also has a wide repertoire of the compositions of Maharaja Svati Tirunal.